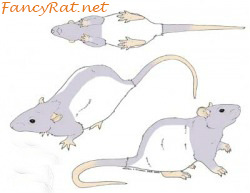 To have a coloured head and shoulders and neck.  An even unbroken stripe to follow spine and partly down the tail.  Faults include, chin stripes, broken or uneven stripe, hood too wide. 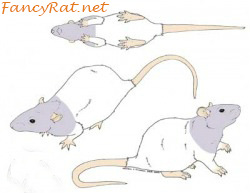 Similar to the hood with no stripe down back. To have a solid coloured head and shoulders.  Avoid spotting on body and chin stripes. 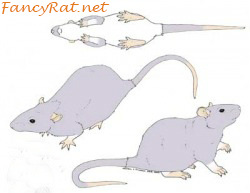 To have as much white on tummy as possible.  white to extend up all 4 legs.  Last third of tail to be white and headspot is preferred. 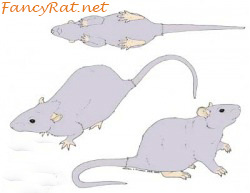 To be a solid colour all over rat.  Faults include white feet. 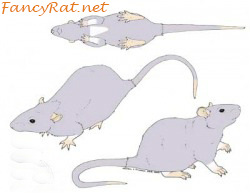 Like a berkshire but with a symmetrical triangle on the chest. 4 white feet and a white tip on tail preferred. 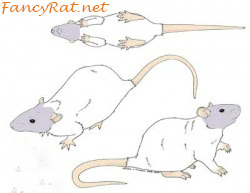 Capped has a coloured head, the colour shouldn't extend past the ears. may have a white chin or chin stripe. 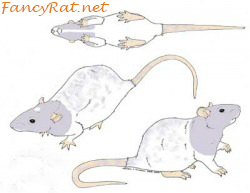 Solid coloured head and shoulders.  Head spot or blaze is ideal. with spotting across the rest of the body.  White chin or Chin stripes may be present. 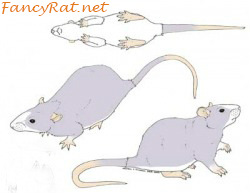 Ideally to have a 'wedge' shaped white stripe up the face, finishing in the middle of the forehead. Blazed most commonly seen on hooded and berkshire rats. 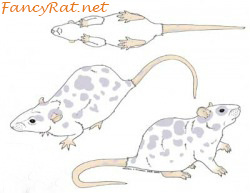 Similar to the dalmatian dog, spots to be marked evenly over body. faults include too much markings on the head, or too many spots in the 'hood' area and not enough on sides of rats. 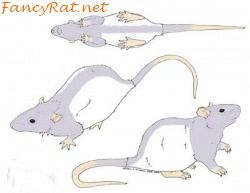 Downunder refers to the coloured stripe down the tummy.  Downunders can be presant on any colour.  Most common with hoods or berkshires. 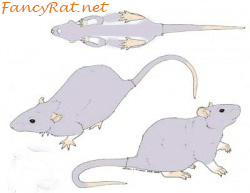